Shooting From The Hip 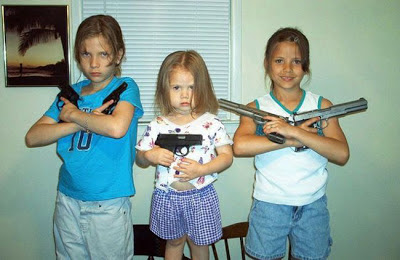 Initially, I was at a loss for words.


I know that may come as a surprise to anyone who knows me, but it took some time to process the facts about the horrific massacre in Newtown, CT before I had a cogent line of reasoning about the whole thing.  That is, if anything that happened in that sad burg has even the faintest relation to reason.  There’s been a tidal wave of words written about the shootings, the shooter, his Mom, the dead kids, the town, banning assault rifles, arming teachers, throwing buckets… all of it is now so much news fodder.


This here is my perspective.


As the details began to emerge, it became apparent (at least to me) that the bloody rampage was yet another in a string of unfortunate-yet-wholly-avoidable death marches that involved readily-available weapons of mass destruction.  What, you think I’m wrong to classify the semi-automatic rifle that Adam Lanza used to reign down death on his victims as a WMD?  I’d say his Mom’s Bushmaster AR-15 death stick should be the very definition of a WMD, as anything that one man can use to mete out instant death to twenty-six people in 10 minutes fits the category quite nicely.  I’m just sayin’.


In keeping with the WMD theme, I’d also categorize the bloodletting as a terrorist act perpetrated on innocent victims.  I dinna care why the shooter decided to lock, load and pull that trigger… no one will really ever know, it will all be supposition and speculation.  But make no mistake:  this was a textbook act of terror, no different than the ones in Blacksburg (VA) or Oklahoma City or New York City or Aurora or Columbine.  Mr. Lanza had obviously made enough lucid and strategic decisions to ensure that he exacted the maximum level of chaos before he decided to cap himself once he realized The Man was on him like flies on shit.
A couple of points to ponder:


HE SHOT HIS MOM IN THE FACE MULTIPLE TIMES.  Think about that for a minute.  HIS MOM.  She had to know she was gonna die in the split-second before she actually, you know, died.  What went through her mind in that brief moment before her skull was pierced by the first of many projectiles vomited from the muzzle of her own gun?  Was she sorry about all the shooting range practice she enjoyed with her now-a-killing-machine son?  Did she regret his ease of access to HER GUNS that were being used to remove her from among the living?  Did her mind’s eye flash to the basement walls of her home, the place where Adam holed up and played first-person shooter video games all day, the walls covered with military posters and images of weaponry and firearms?


HE BLASTED THOSE LITTLE KIDS WITH MULTIPLE ROUNDS, BUDA BUDA BUDA BUDA, JUST LIKE IN A VIDEO GAME.  I don’t blame video games for the violence that Adam wreaked in that school.  However, I do believe that first-person shooter games desensitize the player to the results of real-world violent acts.  I believe the ubiquitous and violent network television programming, where seemingly every other prime-time show revolves around pointing guns and shooting guns, desensitizes the viewer to the violent acts being portrayed on screen.  I also believe that we as a nation, by historically using our military forces when and where they don't belong, sanctify the notion that guns = strength, a piss-poor way to enhance international relations in the year 2012.

Adam’s Mom knew about his predilection for playing violent video games, that he knew how to shoot real guns, that he was mentally ill and that he had easy access to her arsenal of death sticks. How could she not know he was a dangerous threat?


HE WAS WEARING BODY ARMOR AND CARRIED MULTIPLE LOADED WEAPONS.  This was not an accident, his all-Black wardrobe with Kevlar shoulder pads, lapels and boutonniere.  Before his rampage, did he browse the web, looking for just the right shirt, the right pants, the proper footwear, the right grade of anti-ballistic but not-too-binding-in-the-crotch outerwear?  Did he buy the stuff with a credit card, and whose card was it?  Was his Mom monitoring the purchases being made by her mentally-ill son, her Asperger’s Syndrome offspring, or was he able to build his stash of deathwear in the privacy of his fully-optioned basement apartment without her ever having a clue?


These are not random factoids.  This guy knew what he wanted to accomplish and, for whatever fucked-up reason he decided was valid, he definitely succeeded.  His Mom is the most culpable party in this whole sad sorry tale, and she’s as dead as dead can be.  I try to find some sense of grief or sorrow over her demise, but it just ain’t there.  I blame her for the actions of her son that day as much as I blame him.  So sue me.


Naturally, this all gets me back to the flaming brouhaha now bouncing from coast-to-coast in this Land of the Armed-and-Dangerous.  We have one side screaming for a ban on assault weapons (the ‘AR’ in AR-15 stands for ‘Assault Rifle’) and banning large ammo magazines, while the other side screams “SECOND AMENDMENT!!” and rapidly buys up every legal assault weapon in stock, threatening anyone with a spray of lead if they try and take away their death sticks, all while recommending that schools become fortified sites with armed teachers and armed principals.  Truly, it makes me laugh out loud, the stupidity being demonstrated by both sides of the argument, the same one that blows up after each and every massacre.


As I’ve written/argued/discussed numerous times before, we are a nation that TOTALLY LURVES our guns, the idea of guns, the notion that guns make us free, that guns solve problems, that there’s nothing that can’t be solved with a point-and-shoot implement of destruction. Firearms are as Amerikkan as apple pie, baseball, Wal-Mart, diabetes, obesity and NASCAR. Those who spout the insipid trope that ‘Guns don’t kill people, people kill people’ seem to forget that a gun cannot fire itself, and therefore the correct insipid trope should be ‘Guns don’t kill people, people with guns kill people’.


As BHO stated in his excellent (and IMHO, most Presidential) speech to the Newtown residents and the nation on the Sunday following the bloodshed, nothing will change unless WE change, and that is going to be one large order of chow mein.  We’re talking about a seminal shift in the gun-loving culture we wallow in, along with a shift to real-world solutions that are more nuanced than just banning things right and left.  All of this will take time, but we may just be at a spectral moment where we can find reasonable solutions to our national epidemic of gun violence.


I think one of the main stumbling blocks is the notion many gun owners have that the gummint is coming to take away their death sticks.  While this is a massively uninformed viewpoint, it is one the NRA has successfully injected across all strata of gun owners, making it real to them regardless of how nonsensical it really is.  There is not a single instance that can be pointed to during the Obama administration that could even remotely be considered as harmful to gun ownership, yet the notion persists in lieu of, you know, facts and stuff.  The NRA has poisoned the well, and they have much to answer for because they espouse ZERO restrictions to gun ownership, registration, use or any variation thereof.


The time has come to treat firearms in the same way we treat automobiles.  Anyone who wants to own a gun must first study for and pass a use test, demonstrate their ability to properly operate one, register and insure the weapon, and surrender it if misused in any way.  You know, JUST LIKE A CAR.  Assault weapons have no place in the hands of civilians, but if someone has cause to own one, they can submit a request and state their case and, if approved, may possess that assault weapon subject to the same regulations as every other gun.


To those who espouse the idea that we need EVEN MORE GUNS in the hands of citizens to stay safe… arm everyone and then no one will risk bad behavior, I have only one question:  ARE YOU FUCKING NUTS?!?!?!  This is the single worst idea ever in the pantheon of bad ideas to address gun violence in our country.  We do not live in Tombstone, Arizona circa 1875… we need to act like civilized humans and reject the notion of an armed populace.  Same with the idea that gun owners don’t want the Feds to know how many death sticks they own, just in case there’s a revolution and they have to take up arms against the evil soshulists.  COME ON… does anyone in their right mind think an untrained force of self-described ‘patriots’ will last a single day against a modern military machine?


It shouldn’t have surprised me in the least that the gun store next door to my work, a vile place that sells (among others) exactly the kind of weapon used to murder all those little kiddies, has been doing a crapload of business in the last week.  There’s a line at the door every morning by 10am, their parking lot is always full and their customers try to sneak their cars into our lot, even though we have signs posted everywhere blaring ‘PRIVATE PARKING’.  I reckon they think we’ll leave them alone because, well… guns!  No doubt every one of those patrons are simply buying their freedom death sticks to make sure the Kenyan Usurper Socialist Communist Muslim Illegal Alien gun-grabbing President won’t deny them of their Second Amendment rights to own military-grade weapons with which to hunt deer and fend off moochers and takers when the revolution goes down.  I doubt any of them even know what the Second Amendment says. It is truly sickening to know what their money is buying, and why.


Of course, none of this matters to the devastated citizens of Newtown.  They grieve and bury, bury and grieve, all under the watchful eye of the ‘no sparrow shall fall’ national news media who are looking for an angle to report.  If things roll as they always do, this sad event will fall off the radar in a few weeks when another shiny object diverts our national ADD-addled psyche… unless it’s another massacre.  I know this much:  we are way past the time to have resolved the issue of unfettered gun ownership and uncontrolled gun violence in our country.  I’m sick of the mewling and bullshit arguments, sick of the death and the death sticks that cause it, sick of the arrogance and stupidity that causes people to buy weapons like candy and horde them as a hedge against the Zombie Apocalypse.  I’m sick of the gun fetishism that permeates every aspect of our ‘civilized’ society.


Whatever we do, we gotta do it RIGHT NOW.  The scarred families in Newtown, and every other parent who has lost a child to senseless gun violence, deserve nothing less.

Update: in a press conference today, Wayne LaPierre of the NRA stated their official position...  an armed guard in every school across this country will solve the problem of nutjobs attacking schools. Fuck that guy, and every other moron who says the answer to our national epidemic of gun violence is to have more guns in the hands of more people, especially around kids and their teachers.
Lead image, gracias de smirkingchimp.com; Sinead O'Connor 'Throw Down Your Arms' video, muchismas gracias de Youtube.com; fuck the NRA.