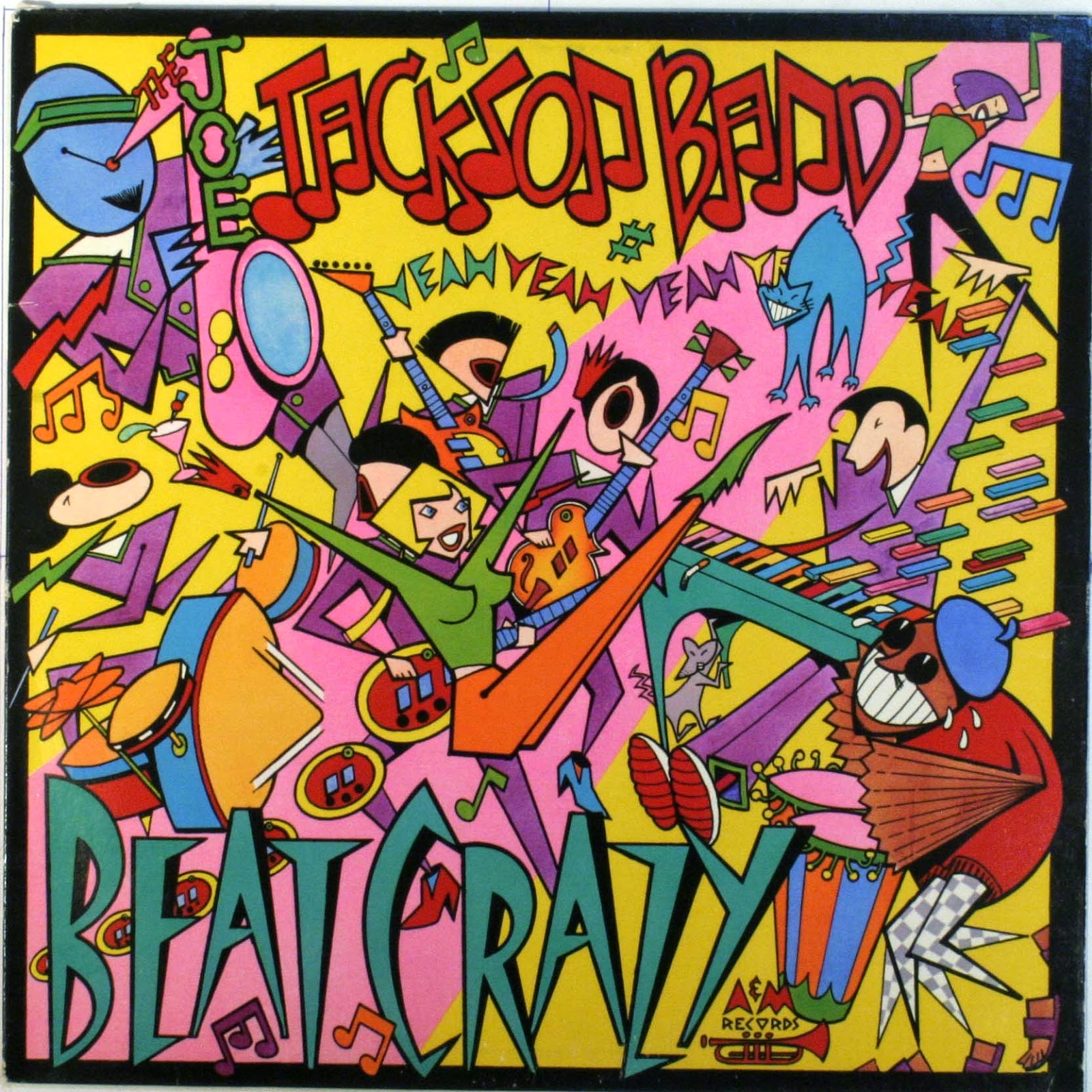 I am a music whore.

I will devour any and all music that piques my interest, regardless of genre or style or context or content. Lady Gaga crushes 'The Sound of Music' on the Oscars and I am in heaven. Kathi McDonald belts out 'To Love Somebody' from beyond the grave and I get teary-eyed at her amazing talent, gone too damned soon. Carlos Santana's guitar soars in 'Samba Pa Ti' and I am transported to my brother's memorial service, seeing him smiling down from the slideshow screen while we all mourned and missed him. Bing and David duet on 'The Little Drummer Boy' and I am left sitting there, dumbstruck at the beauty and pure emotion of a stupid holiday song.

Music has been, and always will be, one of the primary defining measures of my life's inspiration, and every so often, an artist comes along and pops out a musical joint that is simply too bold and expansive to be pigeon-holed, too prescient to be dismissed, too cutting to be ignored.

Joe Jackson's 1980 release 'Beat Crazy' is one of those rare and scary recordings that gets better with every listen. Oh sure, most prolly know him only via his 1978 hit 'Is She Really Going Out With Him?', but to overlook 'Beat Crazy' as a benchmark of modern music is to deny a peek into the future past, a future we are living now and will see more of as time passes and we age and wrinkle and gray and grow wiser and more jaded.

'Beat Crazy' was his third album, credited to The Joe Jackson Band... JJ (vocals, keyboards), Graham Maby (bass, vocals), Gary Sanford (guitars), and David Houghton (drums, vocals)... but it never cracked the Top 40 here or in the U.K due to a lack of touring support.  I remember hearing several of the cuts on local 'new wave' radio when it was released and immediately went to The Wherehouse (I'm old) to buy the vinyl, playing it over and over and over.  Little did I know this LP would stay with me, keeping up as I navigated life's cocktail of happiness and bullshit and love and confusion.

Now... this is NOT a happy happy touchy-feelie warm and fuzzy grip of tunes.  Joe was only 26 years old when this LP was released, and the songs are all dripping with his internal stew of anger and contempt and disillusionment and sardonic humor and a jaundiced eye for the absurdities of life and love. You know, the typical emotional make-up of a befuddled twenty-something young man.

When this album came out in 1980, I was in the middle of a failed 4-year marriage to my first wife, feeling the crushing weight of a relationship quickly going sour. I was bouncing between Northern and Southern California, trying to figure out how to deal with my own personal upheaval and IMHO doing a pretty crappy job of it. Perhaps the timing of this record played right into my own life drama, helping me to question everything about myself and my place in the world.  When I listen to these tracks, I am transported to a place of dangerous change, of worlds colliding, of unknown unknowns.

I wanna share this singular release with you to try and explain how it became a touchstone for me. While I won't go berserker and review every track, I want to highlight some of the songs that floor me with each listen.  I hope you'll get an inkling of the genius and gravitas that Mr. Jackson's creative muse brought to my life oh-so-many years ago.

While this cut may be what some refer to as punk or new wave, that's an overly-simplified description. The lyrics echo a sentiment that every modern generation has opined about the one coming up fast behind them, all weird and noisy and impossible to understand or comprehend. The driving ska beat pushes a manic, almost insane narrative through your head, swimming with images of youth gone wild, uninhibited by the usual norms, ready to tear up everything around you. It's exactly the same fears held by those who were sure that Elvis Presley's gyrating hips would corrupt American youth, or that Led Zeppelin music was merely an excuse for kids to smoke weed and fuck in the converted garage with green shag carpeting and incense burning, always burning.

"Sniffing pot... smoking glue... whatever terrible things they do... smoking LSD and such, it must be the reason why they can't talk much... and it's such a crime how they waste their time, they can't get nowhere, they've all gone BEAT CRA-ZY!"

"Tried to call you yesterday, but you were at the Monday Club, or a Communist demonstration, who cares? You're going somewhere everyday, Vegetarians Against the Klan, Every Woman Against Every Man, never one to one, what's wrong with one to one, just once, just me and you..."

Oh man, this one slays me with the heartache of a relationship that has moved away from its loving core. It can happen so easily, almost imperceptibly, when two people who share a caring and supportive bond slide away from one another, not even realizing it before TOO LATE LOVE GONE! It happens to everyone at some point in their lives, and the challenge is to fight hard to get back to that deep red center, that place that makes you feel whole. It only gets more difficult and complicated as we get older and more difficult and complicated. Think of dealing with your parents, then place that mantle on your better half.  Scary, huh?  The secret:  keep talking, keep grasping for each other, don't let go, don't give up.

"I agree with what you say, but I don't wanna wear a badge, I don't wanna wave a banner like you... though I don't mind it if you do... you're beautiful when you get mad, or is that a sexist observation?"

Before I'd heard this cut, I'd never heard of a white nigger, but it makes perfect sense in the context of the lyrics. Although 'nigger' is typically a verboten word, Joe uses it to totally nail the situation, the two people involved and their tenuous relationship as blokes of different color but similar status.  The combination of  the staccato guitar chords, punching bass and ska-heavy beat make the biting lyrics about race relations and the struggle for equality percolate in a steamy, sweaty cocktail of modern, timeless angst. As relevant today as it was 35 years ago.

Another brilliant, scathingly honest song about a relationship that suffers because of physical and emotional infidelity. What I especially appreciate about this cut is the realness of it... the insolent 'Hey, it's not my fault' attitude he displays, and the 'Alrighty, then' response she gives him right back, much to his dismay. This is the stuff of the world we all live in, not some made-up bullshit.  Anyone who's ever been on the receiving end of infidelity will identify with every word of these lyrics, perhaps painfully so.  That's not a bad thing, touching the raw nerve... it's a great way to remember or hopefully to avoid a painful chapter in the novel we all write about our lives.


"Don't laugh, but there are people in this world... born as boys, and fighting to be girls... people standing in their way, some are straight and some are gay... calling them the drag queens, say 'You can't be one of us, you only have yourself to blame... you don't fit."

Honestly, this is just getting to be so OLD, the whole idea that gays and non-christians and non-whites are somehow less than, somehow a cut below, somehow not as good as white heteros.  This tune is the main reason I wrote this entire record review, because these lyrics are searingly painful and real and so completely relevant, 35 years gone from 1980.  When are people finally going to get over themselves and just admit that it don't matter what color your skin is, what country you're from, what orifice gives you sexual pleasure, what religious icon you wear around your neck, what piece of cloth you wear on your head.  IT DOESN'T FUCKING MATTER. Hatred is a learned emotion, and a person filled with hate for another human being absolutely learned it from someone else. For me, 'Fit' is the klaxon call for universal equality, and we need it now, perhaps more than ever.

Soooo... perhaps these tunes affected you in some way, either positively or negatively.  Maybe you replayed one to get the gist of Joe's controlled anger and emotional upheaval because it resonated.  Maybe you didn't have a reaction at all... whatever, that's the way music can be.

Sometimes, the only way to peek at our real selves is through music, because make no mistake about it: that's what the artist (ANY artist) is trying to scrape at, clawing deeper into their own psyche to free the seething emotional animal that forces them to constantly seek their own ultimate personal truth and creative perfection. It's why so many creative people lose all hope and decide to leave this mortal coil, because they didn't achieve that perfection, which really doesn't exist and never has.  Ask any artist you know about it... they'll tell you if it isn't already too painful for them to do so.

I have and I know, because I'm married to one.

Let these tunes wrap around your head a bit and you'll find the bright nuggets swirling around in the muck and crap. Pluck them out of the slime, rinse them off and marvel at how they gleam with honesty and sharp truth. I love it.

'IN EVERY DREAM HOME (A NIGHTMARE)'