Close Encounters Of The Rasta Kind 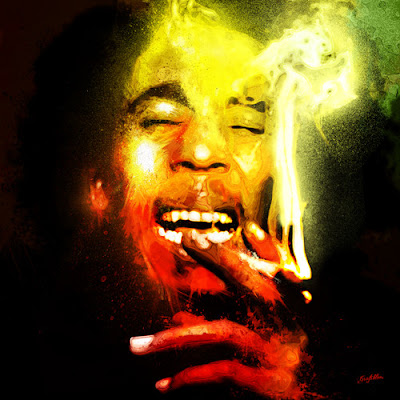 It was just supposed to be a trip to the local swap meet... that's all.

Through the misty haze of time and space, I recall it was either 1981 or 1982, hard to know for sure, but definitely somewhere in that vicinity. Waaaay back... before I'd met The Artist, before my then Soon-To-Be-Ex-Wife dumped me and all my belongings on the curb in front of our apartment building, before my counseling-inspired epiphany about WTF was going on in my life that was making me such a miserable and depressed wolverine.

On yet another tense Saturday morning, I'd convinced the STBEW that it would be a good idea for me to take our Awesome Daughter (then 3 or 4 years old) for a mellow morning stroll at the Foothill Drive-In Swap Meet in Azusa (CA).  I really just needed a little daddy/daughter time away from the apartment, away from the anger and hostility, away from her cigarette smoke choking up the place, away from... reality.

So there we were, me and the AD, her just barely holding my hand, straining ahead with excitement as we walked along the long aisles of furniture and clothing, tools and stacks of old Playboys, knick knacks and used underwear, the excreta of so many garages and storage rooms and exasperated lives that needed some extra cash. The sun had just popped over the high peripheral walls of the drive-in, but the cool of the morning still demanded our hats and sweaters and cups of coffee or hot chocolate or whiskey, if you were so inclined.

We meandered along each aisle, criss-crossing back and forth from one side to the other, one hump to the other, stopping at some booths and passing others by, focusing on stuff that I didn't want or need but was interesting to look at. Natch, the AD was drawn to the used toys and headless dolls and anything shiny and pretty and light enough for her to grab and show me, shouting "LOOK, DADDY!!", putting a smile on my face as only she could.

At the end of each aisle, more people selling their stuff were lined up along the high walls, taking up the periphery with a vengeance, begging us to see their piles before doing a u-turn into the next long aisle. Of course, we always looked at their stuff, because they were there, and we were there, and it was a way to kill some time on a Saturday morning because there was no tension, no unspoken words of derision, no snarky comments, no fucking cigarette smoke.

About half-way down the asphalt grade, we passed by and stopped in front of one booth along the vengeful sidelines. There were lots of books and records, some interesting clothing,  furniture and other household stuff, like so many other booths. What pinged me was the music... it was reggae music, that much I knew, but I had no idea who was singing a tune about not rocking his boat. After a moment, I glanced at the seller and noticed his long brownish-blonde dreadlocks, which were something of an anomaly at the time.  The more I looked at him, the more I realized that... hey, I know this guy!

He was selling something to another dude, finished up and walked over to where me and the AD were hanging around when I realized exactly who he was.

And that's how we began our Close Encounter of the Rasta Kind.

Max and I had been classmates all through grade and junior high school, sharing the same teachers and pre-teen schoolyard angst that was so much a part of growing up in the 60's. We'd also been fast friends and belonged to the same Boy Scout Troop, with countless camp-outs and hikes and shared scouting experiences between us. He lived only a few blocks from my house, sharing a home with his older sister, Mom and Step-Dad.  I knew it was his step-dad because his Mom had a different last name, and his folks were always really nice to me because I used his house (along with several other friend's homes) as my hideout when my own jail grew too stifling and scary.

Max loved music like me, but he was far more in-tune with the musical context and meanings than I was. His room, a place where we hung out quite a bit during junior high, had black walls and psychedelic fluorescent posters and black lights and incense burners and lots of Beatles posters on the walls.  He was smitten by the whole Sergeant Pepper phenomenon, and we'd lounge on the floor, listening to vinyl records spinning, incense burning, curtains drawn, black light on, day-glo colors bouncing on the walls, dreaming of pretty hippie girls. He introduced me to music I was barely aware of, music that would become integral to my life's journey:  Cream, Doors, Janis Joplin, Jimi Hendrix, Steppenwolf,... and The Beatles, he always played The Beatles.

As we grew older and started high school, we drifted apart as childhood friends always do, me to my hot-rod cruising and Drama groups, him to the crew that hung out in a notorious walled-in area of our campus called 'The Patio' where all the stoners and hippies gathered, smoking cigarettes and daring the narcs to bust someone. We never friended again, our lives rocketing in different trajectories.

Until we met again at the Foothill Drive-In Swap Meet.

It was a great reunion, he so glad to see me with my daughter, me so glad to see him looking so weird and wonderful, with his freckled face and crazy dreads. We stood there, talking and talking, my daughter happy to play with some toys and sitting on the carpet, shouting "HELLO!!!" at all the grownups passing by.

Him:  "You daughter is so beautiful... you are truly blessed.  I hope that someday my wife and I will be blessed with a young one like yours."

He and his wife were living with (I think) her Mom, trying to scrape together the dough for their own place, so he was here selling reggae records and tapes, Rasta hats and clothing before it was cool, personal items and the detritus of a life in flux.  I felt a sense of happiness at being with him again, my old friend, there with my daughter in tow and a sea of humanity swirling around us, buying crappy shit and shitty crap.

Him:  "Naw... this place is totally cool, everyone here is just enjoying the vibe, don't worry."

So he pulled out a fattie, lighted it up and we stood there, sharing some weed on a Saturday morning at the swap meet, enjoying our cosmic reconnection, feeling like we owned the world. Eventually he started telling me more about his musical spiritual guide, Bob Marley, whose music he played almost non-stop that morning, music that had grabbed my attention to begin with. With the buzz in my head and the sun in my heart (I was so high!), I felt like I had connected to the music, for the first time really taking in the reggae beat and the sun-shiney songs speaking about oppression and salvation and redemption.

I bought my first Bob Marley record from Max right then and there, titled 'Kaya', which displayed a gigantic burning roach surrounded by pot plants on the album cover.  Perfect.

After about an hour, I knew it was time to head off and leave him to his selling.  We hugged and traded phone numbers and promised that we'd get together again.  As the AD and I slowly walked away, my head turned to glass and my hand filled with my daughter's hand, I felt like it was OK to leave this place and head back to the adult prison I shared with the STBEW.

Max and I never got together again.  I called him a few weeks later but the number was disconnected, so he likely had moved on to another space and place. Soon enough, my own life came crashing down in front of the apartment, my crap strewn all around me, sitting on the curb, lucky to have a borrowed car that I could stuff with my stuff and roll on down the road to... somewhere else. Gone was my married co-habative life, my beautiful daughter, any semblance of normalcy.  I became a semi-vagabond, scratching for places to stay, a couch here, a spare bedroom there, sometimes even sleeping in my borrowed car parked in a friend's driveway, too ashamed to ask for shelter.

I tossed away so many things during that time of flux, but I kept my stereo, my tapes, my records... and my copy of 'Kaya'. My devotion to reggae music and Bob Marley, sown at that swap meet, began to grow into a forest of one-ness with the world, that beat pulsing with my own heart, speaking to me as a catalyst to always be upright, always be moving, always be seeking better things. To this day, I've quietly thanked Max for his musical stewardship and introduction to Bob Marley's world vision through his music, and it has always left me inspired and invigorated to live my life to the fullest.

Robert Nesta Marley died in 1981 from complications of an aggressive cancer that was secretly taking over his body until he noticed a lesion under his big toe, a symptom of a much larger problem, and he rejected traditional medicine for a holistic approach.  Sadly, it did not give him comfort, and he died right around the same time that I discovered him via my good old school friend Max. It's humbling to imagine what Bob's life would have been like had he survived his battle with The Big C, but it's also a fool's errand to speculate like that.  He's become iconic... a musical and spiritual Kahuna, speaking to us all from beyond the ether.  Maybe that's how it was always supposed to be.

Fast-forward to this very year of 2015, to a world of instant digital gratification, social media, Twatters, Snapfucks, Instapoo, FecesBook... all of the digital media we crave with a mindless fervor that makes us think it's OK to cruise the freeway at 80mph while looking down at a text on our device (not me... never me, I swear). As so many do, I look on FecesBook for old friends, school chums, scouting mates, people I knew and liked and loved and cared about.  One day on a whim, I typed in Max's name and BOOM... there he is! I messaged him, waited a few days and sure enough he responded, shocked yet extremely pleased that I thought enough to find him.

We've traded some messages, filled each other in on our things, and it sounds like he's still neck-deep in the musical world, managing reggae bands and promoting concerts.  His dreads are still natty, his face is still freckled, and like me he has some miles on the odometer that have given us both the patina of experience. I made it a point to remind him of our chance encounter so long ago, and how important it was to me then and now. He thought that was pretty cool.

Will we hook up again any time soon?  Hard to say, but we've reconnected again, through time and space and across the vast gulf of our own individual lives. And one thing is for sure: we both still have a deep and sincere love of Bob Marley and his music, a love for reggae that connects us in ways that nothing else can.

I hope that someday, I'll be able to imbue my Grandson with the seed of the Rasta musical spirit, so that he can swim in that ocean of connectivity to the world in a different way than his peers. I feel confident he'll have the same Close Encounter that I did, all those years ago.