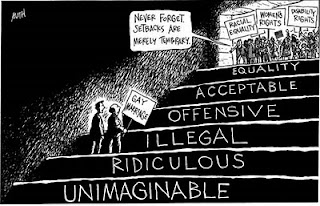 Try as I might, I simply cannot understand the childish, ignorant fear of gay people. Who'da thunk that in the year 2010, this country is still mired in the muck of hatred for 'the other'. I try and talk to my anti-gay religious friends about the fact that homosexuality has existed ever since there has been civilization, that de Bible sure hasn't done anything to stop or eradicate it, so when is it time to get off that decrepit stump?

WHY do the gay-haters obsess over individual sexuality, as if it were a choice? Naturally, so many barely-educated haters ignore the fact that when we are but zygotes in the womb, we begin to develop with both sets of sex organs, only to have one set dominate and the other recede when the magic genes begin to assert their authority. Come on... is there any significant difference between sperm and eggs? Between a penis and a clitoris? What is a 'taint' but a sealed-up vagina? The way I see it, dudes are cheated out of a uterus when the gal parts begin to dominate during gestation, so how hard is it to understand that our malleable grey matter could also be imprinted with either trait of gender?

Like Dean Martin once crooned, 'Everybody needs somebody, sometime', and I damn sure can't decide who will fall in love with whom, or how, or even why. I care not what part of your body you decide to use for whatever pleasure you seek... I care only about the REAL love muscle: the one that sits on your shoulders. Use it wisely and you will find the person that makes you head spin, your heart race and your pupils dilate when they are around, and it DOESN'T MATTER if they are the same gender as you or not. It is no more controllable that the weather or the tides.

So... civil rights is human rights, and no one should have the authority to say that person can marry, but not THAT one. Sheesh... it ain't rocket science!
Posted by Oblio at 7:32 AM