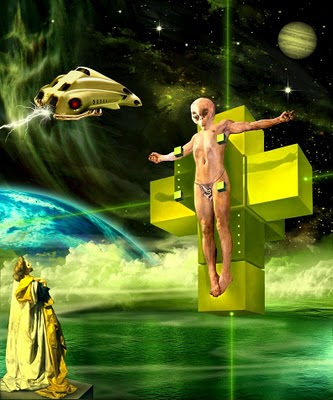 It started as a comment during a recent conversation I was having with my Dad. I was describing the process and materials that were used in the construction of my wife’s latest ‘alternative Christmas tree’, a yearly tradition with the crazy artist I married.

Me: “It’s built with bamboo skewers and gift wrap and tissue paper and hot glue. We didn’t want it to look like a Christmas tree, but still have that feeling.”

Him: “You know, you can’t really call it a Christmas tree.”

Him: “Well, it doesn’t have anything to do with the letters C-H-R-I-S-T in ‘Christmas’, does it?”

I wanted to ask him WTF a newly-dead tree, covered with ornaments and standing in the living room, awaiting a spark to catch on fire and immolate everything, has to do with C-H-R-I-S-T-mas. I wanted to, but was momentarily dumbstruck over the magnitude of his statement, at what he was inferring. He’s pretty conservative in most ways, being 75-years-old and all, but it was the matter-of-fact tone of his comment that stopped me cold.

It happens every year nowadays, this whole argument about what the Christmas holidays actually mean, what it stands for, what we should be celebrating. It rages on the teevee and in the newspapers, on the blogosphere and around dinner tables. It’s one of the singular hallmarks of our modern American discourse, meant to divide believers from everyone else, a litmus test to see how devoutly American you are.
I have my own opinions about how and why so many people have accepted the lyrical allegory of The Bible (or The Qu’ran or The Talmud or whatever) as their dogma of choice, their marching orders for access into the afterlife. I get it, really I do. We humans fear death more than anything else, so it’s natural to accept the promise of ‘life everlasting’ in exchange for emotional and spiritual servitude on this mortal coil.

As for the meaning of Christmas, an invented holiday which was nicked from the Pagan Winter Solstice bacchanal in the first place, the most vocal adherents to the biblical interpretation are clear: it’s all about the birth of Jesus, their Lord and Savior. The Immaculate Conception, the Star of Bethlehem, the Three Wise Men, the sheep and cattle in the manger, the whole star-spangled glory of it all. The Bible is the be-all end-all Book of Answers… nothing else need be considered, because it is the WORD OF GOD and, after all, God is infallible, as is The Bible. Case closed, move along, nothing more to see here as you try to salvage your dirty soul in this life while preparing for the next.

(Side note: the stop-motion animated Comedy Central series 'Robot Chicken' has the most outrageously hilarious segment regarding the whole 'Away in the Manger' story. Deeply disturbing, fall-down funny stuff.)

It got me to wondering about the basis for the myth, the legend, the lowdown on the birth of Jesus. Now, I like to think of myself as an informed person with an expanded consciousness about our existence. Why not use some of what I think I ‘know’ and extrapolate that into an understanding of how this notion of a child born to save the world could be so all-consuming and important to so many followers. It’s a subject that has been bouncing around in my head for some time now, but Dad’s comment started the cogs turning and the synapses firing and gave me the inspiration for this little exercise.

To begin: although not a concept accepted by many (if any) Christians, I hold dear to the notion that our Earth is but a microcosmic speck of dust in the vastness of our spectral universe, which plays host to billions of other stars far greater and more important than our own little Sol. My life as a supporter of all things scientific has taught me to accept that amongst those billions of stars are also hundreds of billions of planets circling them. The likelihood of other life forms holding sway over the surface of many of those planets is an easy concept to grasp, at least for me.

That’s right… other life beyond ours exists in the universe. Deal with it. It could be a single-cell protozoic society of flagellates, or it could be horrific blobs of acid-spewing multi-faced time-warping octopodi, or maybe even bi- or tri-pedal upright skin bags like us. Not important what they are, but they are… out there. I like the idea of that, first and foremost, because it makes me feel like we have neighbors. And some of them are also very likely to be WAY MORE ADVANCED than we can ever hope to be.

Anyways, here’s my point: assuming there are other far more superior life forms out there in the Cosmos, how far-fetched would it be to consider that the story of Jesus’ birth was the retelling of an actual event that occurred when his Mom was ‘visited’ by an off-worlder? I mean, wouldn’t that give new meaning to all those ‘NOTW’ stickers being proudly displayed on the back windows of SUVs? Think about it – an immaculate conception is one that could have occurred when she was unconscious and inseminated by one of them sneaky aliens, for whatever purpose. The Star of Bethlehem? Yup, a hovering spacecraft. The ‘angels on high’? Right again… more of those guys. It would also explain a lot of the stories about Jesus… healing the blind and disabled, water into wine, walking on water, rising from the grave… all of it.

Does this mess with your sensibilities a bit? Dunno why it should… from my perspective, the assertion that alien visitors were behind the story of Jesus makes a whole lot more sense than the purported acts of magic he performed as the ‘Son of God’. Now, I will agree that it would mean those visitors were pretty awesomely talented to perform such acts, but assuming they were able to traverse the distance from their rock to ours must also allocate them some majorly strong juju. The more I think of the Jesus story within this framework, it only seems more plausible, not less. MORE PLAUSIBLE… NOT LESS.

A point of fact: I am NOT an adherent to the idea that there ever was a Joseph or Mary or baby Jesus or any of the stuff that believers believe. I think the Bible was a very craftily-written morality fable, an allegory to be used on a vast uneducated mass of people who did not have anything better to believe, so… why not the Bible? Like the earliest man, we have always sought to understand who we are, why we’re here and for what purpose. Naturally, those cagy early religious leaders knew the way to get the unwashed masses on their side, to control and manipulate and oversee them, to convince them of the gravitas of their story, a story that I believe was created out of whole, unwashed cloth. However, taken in the context that the story was a legend passed down verbally for generations before it was set to papyrus, the only semi-plausible explanation would be… VISITORS.

Are you howling at me with anger and hostility right now? Are you incredulous at the insanity of my supposition? Are you falling to your knees, praying hard to delete this concept from your conscious thoughts and for me to be damned to hell? Or… are you quietly thinking a bit more about the stars, the universe, the vastness of space and all that it contains? Knowing far more now than anyone knew when the Bible was written, can you envision a series of events as I described? Honestly… doesn’t it make more sense than the talking snake-burning bush-begat begat poetry? It does for me.

As I’ve written before, I do not fear dying or death, the great nothingness that awaits every last one of us. I do not believe there is a conscious afterlife that can be seen or tasted or touched. I believe that we have only one conscious life, and that everything before and after is unknowable. When my bell is ready to be rung, I know that my life’s force and energy will be absorbed into the natural machine that powers our Earth, just like the billions of lives that have been here and gone before me. Our cumulative energies are what makes this mysterious planet work and survive, and it may also be to our peril if we keep ruining it. It has less than nothing to do with a magical being who supposedly died on the cross so that we could continue to live and worship him.

BUT… if I were to ascribe to the notion that the story of Jesus was based upon ancient fact, I would find it far more logical to buy the astral connection rather than the magical mystical one. It just makes sense. In fact, a few years ago we built a 'tree' that celebrated alien visitation, the kidnapping and 'probing' of a certain ex-President, and the spawn of a new generation of little Green men. It was COOL.

In a sweeping circular motion, I come back to the idea of the Christmas tree and what it represents. For my wife and I, the alternative trees are a way to tweak the notion of the holidays to our satisfaction, for our enjoyment. Yes, we’ve had real trees too, but only a couple, and we’ve not used any traditional holiday decorations in years, save perhaps for the weird Pink and Black and Red fluorescent aluminum mini-trees that we prop up around the house. We celebrate the idea of loving compassion, the importance of family and friends, the message that we are all more united by common cause than divided by fear and uncertainty. That's what Christmas means to us.

None of these things are secular or sectarian… they are human. If you believe that Jesus was a real person and take comfort and solace in the poetry of the Bible, you have what you need to revel in the Glory of Christmas. If you have questions or even none at all, then keep seeking the truth, your truth, from the world around us. Celebrate Christmas in any way that suits you, or not at all. The most important thing to keep in mind is that we have free will to believe what we choose, or not to believe.

A friend posited this question to me: If, upon my death, I learn that there is indeed a God and Heaven and Hell, what will I say to God as my defense for not believing? My answer would be: "Hey God, many thanks for the free will and open mind you gave me. It has served me well, has allowed me to forge my own path, and live the life of my choosing. GO FOR IT."

I am not afraid of what I don't understand, but I am the first person to admit that what I don't know... is a lot. I'm OK with that, and it helps me live every day with joy and purpose and happiness, as if it is my last day... or even Christmas Day.

To see the alternative Christmas trees mentioned in this post, please log onto http://www.misguideddesigns.com/, then click on MD Xmas Trees. To catch a whiff of my metaphysical leanings, read Arthur C. Clark’s novella ‘2001 – A Space Odyssey’ and then watch the film immediately afterwards. Alien Crucifixion image courtesy http://www.freakingnews.com/.
Posted by Oblio at 3:32 PM